SVALBARD 360
is a project of extreme kayaking expeditions with the objective of
reaching the furthers and most remote places on Earth.
Beyond the horizon is an idea of pioneering trips to far away and wild
places which we are planning to reach by sea kayaks containing all
necessary equipment to survive and reach our goal.
The only rule we have is choosing most difficult destinations, maximum
self-sufficiency and two or three kayaks making up a harmonious team.
GOAL FOR 2011
The first expedition of this project is “Svalbard 360” with the ultimate
goal of encircling the Svalbard archipelago - representing some of the
most enduring conditions for a sea kayaker. We will be exposed to low
temperatures, endless strong winds and other difficulties such as dense
ice pack which can become a serious obstacle especially in straits of
Hinlopen.
So far none of the similar trials taken by teams from different countries
has been successful.
Svalbard 360 is also the first Polish kayaking expedition operating so far
up north.
Our journey beyond the exploratory and the sport aspect wants to
follow up a magnificent history of the Polish presence on Spitsbergen,
where since 1958 Poland has conducted a regular scientific research
and Polish Polar Station of Sciences has been running continuously
since 1978. It lies off the coast of the Gulf of the White Bear, inside the
Hornsnud fjord. Also worth mentioning are the achievements of Andrzej
Zawada, leader of the expedition that reached the most difficult
peaks of the island and of Stanisław Siedlecki who accompanied by
professor Ryszard Wiktor Szramma encircled Spitzbergen by a cabin
less boat.

In the period from June to August 2009, the originator of the expedition
and its director Piotr Opacian completed his reconnaissance on
the Svalbard archipelago, creating a general plan of the expedition.
In the beginning of 2010, work started on the selection of equipment
and food. In February 2010, the Aquarius company - manufacturer of
sea kayaks undertakes to support the expedition and prepares the
vessels. This was why the four kayaks made of super lightweight and
durable carbon -kevlar fiber have been designed. Each kayak was built
to precisely fit the each individual member of the expedition, so as to
optimally combine the most important parameters such as comfort,
capacity, stability and controllability. Also in February, the expedition
has received official consent of the Governor of Svalbard.
March, April, May 2010- picking of the equipment, food, and meetings
in Aquarius workshop continue. A preparatory program aimed at
practicing sea kayaking self-assurance and long hours of training in the
waters of the Baltic Sea is implemented. The program includes independent
and joint activities throughout the instructional period form
January 2010 to June 2011.
On the 16th July 2010 at the yacht harbor of Gdynia kayaks are baptized
- a meeting to promote the expedition.
July 25th, 2010, the Naval Academy Research ship- Horizon II , which
along with supplies for the research station transports all our floating
gear with a deposit of expedition food, fuel for camping stoves and
other equipment leaves for Spitzbergen.

Arkadiusz Mytko - an experienced traveler and organizer of expeditions
to Patagonia and Mexico. He also organizes training courses on motivation
and team-work and survival in difficult climatic conditions. For his
journey Patagonian Triathlon he received a prestigious Kolos award in
the category of achievement in 2009. Climbs in the Andes and Mexico,
traverses glaciers and kayaks across Tierra del Fuego. He kayaked alone
one of the largest rivers in the world Rio Parana - 2000 km. Among his
achievements is also a traverse of a third largest glaciers in the Patagonian
ice sheet as well as numerous ice climbing in the local area. His reports
and pictures from the expeditions were published in many magazines.
He also participated in numerous radio and television programs.

Przemysław Szapar - born in Gdynia in 1977. Mid distance runner,
climber , traveler and kayak enthusiast. In the 90’s player of the Baltyk
Gdynia sports club, later of Lechia Gdańsk. Participant and winner
of numerous extreme long-distance runs. Winner of the orientation
100km race – Harpagan. He completed the Butcher race and Bergson

Winter Challenge - nearly 400 km in the mountains during winter.
He participated in many climbing expeditions in the Polish Tatra
mountains and other rocky regions of Europe.

Piotr Opacian - kayaking instructor and experienced rower. For his
kayaking achievements he received the 2006 prestigious Kolos award
and journalists “Achievement of the Year Award” at the National Meeting
of Travelers, Sailors and Alpinists. Nominated for the National
Geographic “Traveller” award. He has kayaked in different regions of
the world for many years. He completed a difficult lonely sea voyage
along the coast of Patagonia - 1000 km, lone crossing of Lake Baikal,
Xingu River in the Amazon - 1100 km and the upper Lena in Siberia
from the sources to Kaczuga. Photographer, archaeologist, geomorphologist. 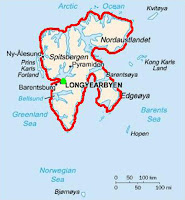 The expedition is scheduled to start at the beginning of July 2011.
The expedition will depart from the Polish Polar Station in Hornsund
and will move in a clockwise direction. During our trip we will visit
the other Polish research station of University of Nicolaus Copernicus,
which is located on the west coast in the Heggodden area. We plan to
reach the straits of Hinlopen in late July, early August, i.e. at the optimum
time which allows to hope that the reservoir will not be blocked
by ice packs.

If weather conditions are convenient we will circle around the island
of Nordaustland - the second largest island of the Svalbard archipelago.
Due to the very difficult weather conditions that prevail in the
eastern part of Svalbard, the waters in this region are considered to be
impassable. Then we will head south and end our journey at the starting
point in Hornsund. In case of sufficient time we are also planning
to go around the Virgin Islands of Edgeoya and Barentsog
Autor: Aquarius Kayaks o 16:53